IT IS OFTEN ESTIMATED THAT MORE THAN 120 FRENCH SOLDIERS WERE KILLED AT FORT DE LEVEAU ON SEPTEMBER 7, 1914. UNFORTUNATELY, WE ONLY KNOW THE IDENTITY OF A SMALL PART OF THEM. 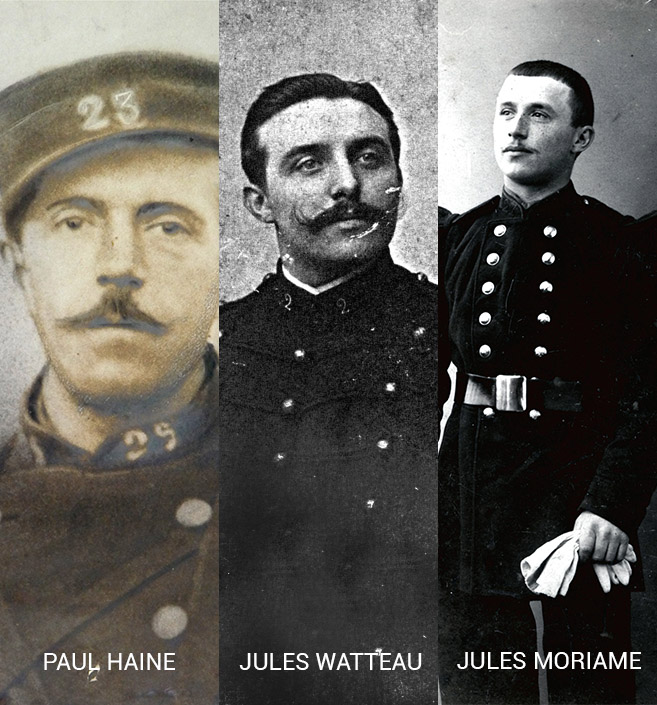 THE LEVEAU CEMETERY
Most of the bodies of the soldiers killed on September 7, 1914 were found after the fighting and buried in a cemetery located opposite the fort. Nowadays this cemetery has disappeared. A German postcard mentions that 72 French and 6 Germans were buried there.

THE EMMURED
Unfortunately, not all the soldiers were buried after the battle. Some will remain trapped in the ruins of the fort for over 80 years. From 1995 to 1998, nine of them were exhumed by the association’s volunteers. Their names were brought back from the past and especially from oblivion thanks to their identity plates.

After three years of hard work, a commemoration is organized at the fort of Leveau in the presence of the families of these soldiers who inaugurate a commemorative stele.

Eight bodies are now buried in the National Cemetery of Assevent. The family of the ninth soldier, however, chose to bury the body of his grandfather in the family vault.

Unfortunately to this day, there are still bodies of soldiers missing from the battle of Maubeuge. The violence of the bombings, the burials in mass graves make it sometimes very difficult to know where these men died. The association is still looking for information or testimonies.