William Wyatt PATTON jr, better known under the affectionate name of “Junior” was born on January 10, 1918 in Stella, Missouri. Growing up on the family farm in Granby near Stark City, he was the son of William W PATTON Senior and Rhoda F PATTON. He was the oldest of three children. The young William, who pursues a brilliant schooling, shows himself particularly gifted. In 1930, at the age of 12, he received a certificate of honor from the Neosho school. He loved bananas covered with ice cream. Very quickly, a passion was born in him: airplanes. A passion that will write a short and intense destiny for him.

In disagreement with his father, he joined the US Army Air Corps at the age of 16 in June 1934 thanks to the signature of his mother. After graduating from Midway High School, first class PATTON 6256361 arrived in Texas at Randolph Field. Military superiors deeming him too young will initially assign him to the Officers’ Mess. In 1939, he was given the rank of sergeant by Colonel John B Brook. The destinies of these two men will cross again at the end of the war. On September 12, 1940, he was in Honolulu at Hickam Field, where he was appointed Staff/Sergeant by Captain Louie P Turner. 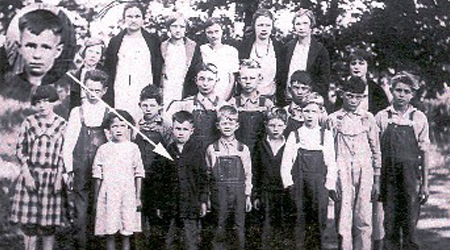 On the morning of December 7, 1941, the Japanese fleet attacked Hawaiian military and civilian installations. More than 300 planes, in two successive waves, targeted ships, planes and bases…
Survivor of this entry into the war which caused many losses among his comrades, William was promoted to the rank of Technical Sergeant on February 1, 1942.
Still on the base of Hickam within the 5th bombardment group, he participated in June in missions against the ships of the Japanese squadron during the battle of Midway. On September 3, 1942, he rose to the rank of Master Sergeant. 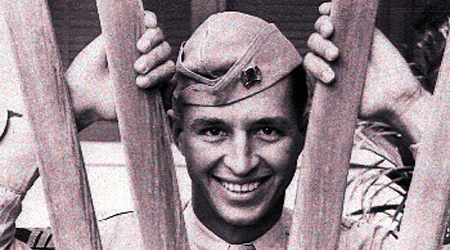 On the recommendation of his head of unit, he joined the officers’ school. Declared fit for flight training, he was transferred to California, to the West Coast training center. Student pilot Patton made his first forty minutes of flight at the controls of a Boeing Stearman PT-13B. On June 15, he received his certificate bearing the mention “Primary flying time correct”. Student pilot Patton, back at Gardner, joined the Aviation Cadet School on June 27 for “Basic” training. On August 25, he will total 145 hours of flight. There he learned instrument flight, night flights with lighted landings or in “Black-out”.

After a twin-engine qualification on the Beechcraft B-18, it’s time to move on to the Pilot and Co-pilot qualification on the B-17F. It was on HOBBS airfield, on January 19, 1944, in New Mexico, that Second Lieutenant Patton graduated from the Army Air Force Pilot School on the B-17F. Finally it’s time to take the road to Europe to be part of the hundreds of bombers that take off every day for the Reich. During these perilous missions, dozens of crews suffered the attacks of the Luftwaffe and the fearsome barrage fire from the Flak. 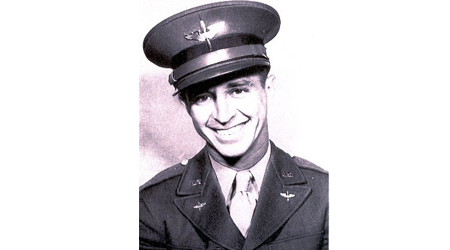 In May 44, as soon as he arrived at his base in England, William was assigned to the 8th Air Force for long-range bombing. The installations of the 8th Air Force are a veritable hive representing nearly 2,000 aircraft. They are organized into 12 bases for bomber groups, and 15 bases for fighters. First in the 94th Bombardment Group, William was transferred to the 560th Squadron of the important 388th Long Range Bombardment Group.
During his service within this unit, he will obtain the Air Medal and four Bronze Service Stars for his missions in Normandy, in the North of France, the Ardennes and the region of the Rhine. In the summer of 1944, he volunteered to join the Top Secret Aphrodite project. 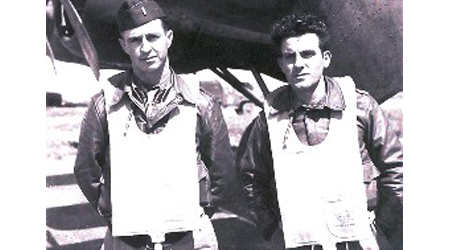 Following the direct threat of the V-1 and V-2, the American and British staffs are looking for a solution to destroy the launch pads for these new weapons. The English fill the holds of the enormous Lancasters with a single bomb, the “Gran Slam”. Weighing more than 10 tonnes, it was dropped at an altitude of 12,000 m and penetrated 30 m before explosion into the fortifications resistant to conventional bombing. The Americans, on the proposal of General Doolittle, are working on the drone project.
On June 26, 1944, General Doolittle agreed to modify 25 B-17s to transform them into drones and more particularly into flying bombs. The ultimate goal is to get the B-17s to crash into their target with 9 tons of high destructive explosives. A first camera placed in front of the instruments restores the piloting information so that the operator can take over after the ejection of the crew members. A second camera placed in the Plexiglas nose of the device, gives him a global vision of the objective. Remote piloting is done as far as the target via a Radio-Control system. But the Aphrodite project needs pilots despite its autopilot phase. For this, Doolittle recruits as usual small groups of volunteers, selected from among the best, because these missions turn out to be very dangerous.
On October 15, 1944, aboard B-17 G 42-37743, accompanied by Lt JW Hinner, William took off for one of these Aphrodite missions. These missions were not very successful and proved to be more dangerous for the crews than for the Germans. The project was stopped on January 20, 1945. 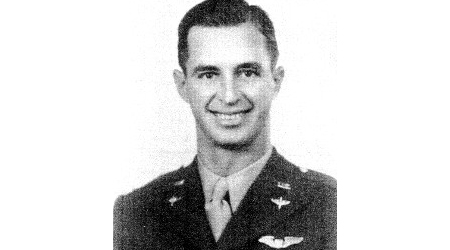 Having found that the German fighters or the Flak had never succeeded in driving back the bombers of the 8th Air Force, but that bad weather had managed to do so several times, Colonel Budd J Peaslee proposed that fighters be sent as scouts. They will transmit vital information regarding the weather and enemy activity on the objective. After being a bomber pilot and receiving the Distinguished Flying Cross, William fulfilled his duty. However, he again volunteers to be a fighter pilot. Going from bomber pilot to fighter pilot is quite rare and proves the recognition of his command. After a tough selection that only passes the best, William is assigned to the Goxhill conversion base to fly on T-6 NA. Then he was again transferred to the 55th Fighter Group at Clobber College for his P-51 training. 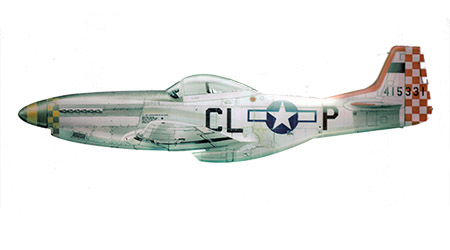 On January 15, 1945, his former bomber group, the 388th BG, went on a mission south of Munich to the Ausbourg marshalling yard in the Lechfeld region. The 3rd Scouting Force will do weather reconnaissance. Raids were reported that day for Europe involving more than 800 Allied bombers and 560 escort fighters. Lieutenant Patton carries out his mission without too much problem with his leader, Lieutenant Brian .J.Booker at the controls of their respective Mustangs. Returning from the mission to their base in England, overhead Roubaix at 11:15 a.m., Lieutenant Patton’s plane left its formation while describing a 180° turn on the left wing without responding to radio calls from its leader. A maneuver that brings up a sudden problem: mechanical failure, toxic emanation, … fire on board? His Leader will indicate in his report that he then lost sight of him, because the fog did not allow the observation of his trajectory. 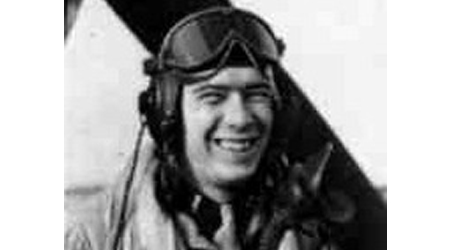 Missing in action
What happened to William W Patton Jr who had just turned 27 five days earlier? Nothing, except a report from the Gendarmerie of Lt. Bernardeau. This reports the crash around 11:30 am of an American plane coming from the North, 500m from the Longueville station. The plane sank 3m into the ground and the pilot was not found. More mysterious still, this report indicates the presence of the American authorities on the spot, whereas those already have teams specialized in the recovery of the crews. On January 17, an article in the Voix du Nord also reported this crash using the terms of the Gendarmerie report. Then nothing. At the Neosho telegram office, a family friend asked his superior for permission to deliver the terrible Western Union message in person. His mother, worried about having no more news of her son, learns of his disappearance through this message from the Secretary of War. Since that day, Rhoda her mother has undertaken research through the War Department and the Red Cross. After a year and a day and without information, on January 15, 1946, Lieutenant William Wyatt Patton Jr was declared dead. The parents always hoped to find him alive. They died without knowing anything of what had become of their “Junior”. 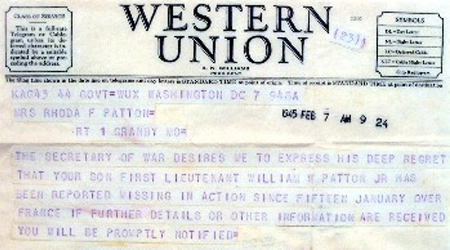 Following the discovery of the wreckage of his P51 in February 2001, the body of William Patton was found, 56 years after his disappearance. William Patton is buried on November 9 at Springfield Military Cemetery, Missouri, after a religious service at Neosho, near Stark City. The “Welcome home, William” that resounds with so much emotion in the mouths of his family, is answered in France by the respect of an entire community. It is a great proof of Franco-American friendship that is symbolized. Around the memory of this hero of the 2nd World War, today’s youth can remember that this man, who came from afar, sacrificed his life for our freedom. 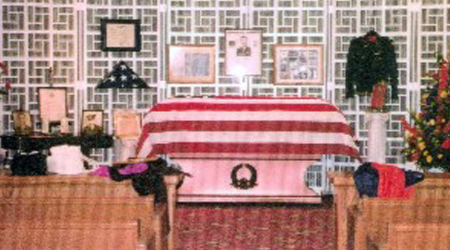 Inaugurated on January 15, 2003 during the ceremony, the memorial brings together the elements of the plane found at the scene of the crash at La Longueville in February 2001.

Thanks to the documents donated by his family, the life and career of William Patton are also presented.

February 2001: A plane is found in La Longueville, with an American pilot on board. This news, which is spreading in the region, will make national and international headlines. The effervescence of the first days passed, the American authorities set to work and comb the ground with a fine-toothed comb, an identity disc is found. Thanks to her, we now associate the name of William W. Patton with the wreckage, but it will still be necessary to wait for the results of the DNA analyzes to be sure of the exact identity of this pilot who came to find death one morning in January 1945 in this muddy field. A memorial is set up at Fort Leveau and the date of the inauguration is set for September 29, 2001.
Unfortunately, the murderous madness of the September 11 attacks postpones the official ceremonies to a later date.
The American authorities then choose the date of January 15, 2003, the anniversary of the disappearance of the pilot. This additional period of time imposed by events nevertheless allows us to know much more about the fate of this young 27-year-old pilot who has already accomplished an impressive military career. It was while returning on January 15, 1945 from a reconnaissance mission in the Munich region that Lieutenant Patton was reported missing, the last visual and radio contact being established above Roubaix at 11:15 a.m. After the war, his mother will carry out a lot of research to find his trace, in particular thanks to the red cross which will lead the investigation across Europe and in the various prison camps. Steps that will unfortunately remain in vain.

Sorry, the comment form is closed at this time.