The museum is the last witness to the siege of the city and is open to the public on a regular basis. It devotes a great deal of space to the Battle of Maubeuge in 1914. The design of the stronghold, the troops involved and the course of the fighting are explained in detail.

You will also be able to discover the “The tunnel where the dead were walled” inwhere the bodies of nine French soldiers killed during the bombardment of 7 September 1914 were found.

The artillery in the
trenches

As the conflict was buried in the trenches, the artillery had to adapt to this new type of conflict. Discover some of the weapons and ammunition developed
to respond to this war of positions.

The world of the trenches

In 1914, after the first months of fighting, the war of movement gave way to a war of positions. The men are buried in the trenches. You will discover the weapons and uniforms developed to adapt to this new kind of conflict. Then you will share the daily life of a French trench and go down into the underground dugouts where soup has just been brought back from the rear, while an officer interrogates a prisoner captured near our lines.

The entire museum of Fort Leveau is
dedicated to the First World War.
From local history to a more global vision of the conflict, the
daily life of the soldiers and the living conditions of the “Poilus” are
from the early days of the war in the Séré de
Rivières forts to the mud of the trenches.

or Click on the blue dots on the right to find out more.

Discover the functioning of a fort in 1914 with a model of the site but also with reconstructed living spaces which will plunge you into the daily life of the soldiers living at Leveau Fort.

Enter the reconstruction of the food storage area and then discover the kitchen where the troop’s meals were prepared.

Enter the reconstitution of a troop’s barrack that housed 48 men. 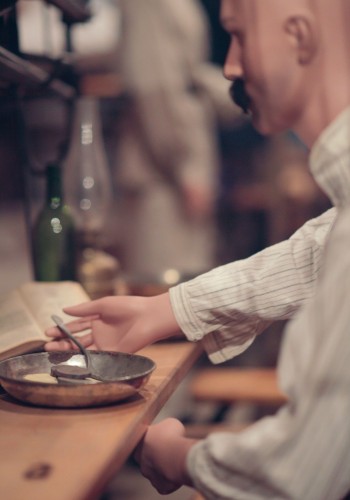